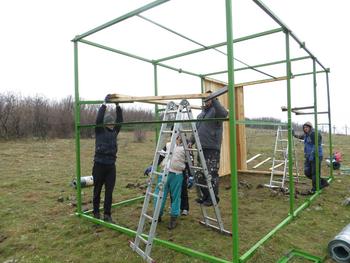 New adaptation aviary for Egyptian vultures in the Eastern Rhodopes

30.03.2018
During the last weekend a team of BSPB and Green Balkans, in the framework of the LIFE project Egyptian Vulture New LIFE" LIFE16 NAT/BG/000874 built an adaptation aviary in the area of ​​Potochnitsa, Eastern Rhodopes. Despite the rain and low temperatures, the aviary was fully completed and will host on March 28 three young Egyptian Vultures, granted to the project through the kind cooperation of Mr. Antonin Vaidl (Coordinator of the EAZA EEP for the species). The birds hatched last year in Schonnbrunn Zoo and Zoo Prague.

They will stay in the aviary until mid-May when they will be released. This period is needed so that the young vultures adapt to the site and stay in the area until the time for migration has come.

The area where the aviary is placed was chosen on purpose - it is in the core area of the population of the species in Bulgaria, where the level of threats is relatively low, and is in close proximity to one of the feeding sites regularly visited by Egyptian, Griffon and Black vultures. The young Egyptian Vultures will be in constant contact with other birds from the species and will be able to learn and interact with them, which is a key factor for their successful adaptation.

This will be a pilot experience in Bulgaria for releasing into the wild of captive-bred Egyptian vultures by the delayed release method (the vultures are one year old or more). The method has been successfully applied for years in Israel. This approach relies on the assumption that the birds have enough time to gain living experience in finding food and to enter into good fitness before taking on the challenging migration to the South (most of the wild young Egyptian vultures die during their first migration to Africa).

In parallel, this year, as well as the next few years other release methods will also be tested, e.g. fostering and hacking. The aim is to find the best approach for the purposes of a future restocking program for the Balkan population.