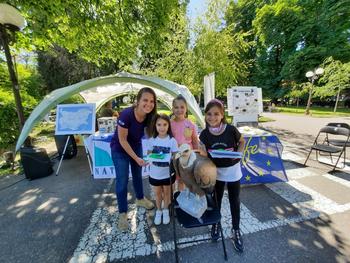 We celebrated the Natura 2000 Day - one of the most important nature conservation dates, together with our partners from the International Youth Centre – Stara Zagora, Alegra Art Studio, Iliyana Semerdjieva, Gabriela Georgieva and Mariya Stefanova.

People were very interested in the event in the very first minutes of the festival. The space around the fountains in the 5th October Park everyonewith a photo exhibition with the protected species and habitats from the ecological network Natura 2000. The models of the Griffon Vulture, the Lesser Kestrels, the Sandwich Tern and the Red-breasted Goose attracted people from all age groups to the Green Balkans information stand, where our team was happy to answer all questions.

The information stand of the Green Balkans Wildlife Rescue Center aroused great interest. The Centre’s team joined the event together with their faithful friends- the Tawny Owl Chara, the Kestrel Vladko and the Buzzard Misho. Visitors had the opportunity to get close to the birds and received a lot of information about the work of the Rescue Centre and the protected species.
The children art zones with workshops made the youngest visitors happy. The children had fun and learned new facts about nature conservation together with their parents and with the help of our partners.

The Hour of the Vulture and Natura 2000 intrigued the guests of the festival. We talked about the four vultures in Europe. Using an interactive puzzle with questions about the vultures, children and their parents learned new and interesting facts about the species and their importance for nature. The Green Balkans team presented the activities within the “The Bright Future for Black Vulture” LIFE14 NAT/BG/649 project project, which unites the efforts of five main partners from four European countries.
The visitors had an opportunity to visit the stands with zero waste/eco-friendly products – bio cosmetics, eco bags and other alternative eco options, used on a daily basis.

The incredibly talented children from Alegra Art Studio and their teacher Ganka Dobreva, created a unique atmosphere during the “Natura sings “Hour. Everybody had a smile on their face and the good mood remained in the park long after the end of the festival.

The event was part of the information tour of Green Balkans and friends, realized within the “Natura 2000 in Bulgaria – New Horizons” LIFE17 GIE/BG/371 project, with the support of the Municipality of Stara Zagora.

We would like to thank our partners - International Youth Centre – Stara Zagora, Alegra Art Studio, Iliyana Semerdjieva, Gabriela Georgieva and Maria Stefanova and to the Municipality of Stara Zagora for their support!

Red-breasted Goose
The Red-breasted Goose is a globally endangered species, protected within the Natura 2000 ecological network. Bulgaria is an important country for the protection of the species - almost the entire world population spends the winter in the region of Primorska Dobrudzha.

Sandwich Tern
In Bulgaria, the Sandwich Tern nests only on Pomorie and Atanasovsko lakes. Thanks to years of hard work, today the population of the species in Pomorie Lake is the largest on the Balkan Peninsula. Listed as an endangered species and included in the Birds Directive, the Sandwich Tern and its habitats are protected by the Natura 2000 ecological network.

Vultures
There are four species of vultures in Europe - Griffon, Black, Egyptian and Bearded Vulture. All of them are strictly protected by Bulgarian and European legislation. As rare and valuable species, they fall under the protection of the European ecological network Natura 2000. Bulgaria is home to only three of them – the Griffon, Black and Egyptian Vulture. The Bearded Vulture - a symbol of Bulgarian nature protection is considered extinct from the country.

The tour of Green Balkans and friends for NATURA 2000 is realized with the cooperation of: