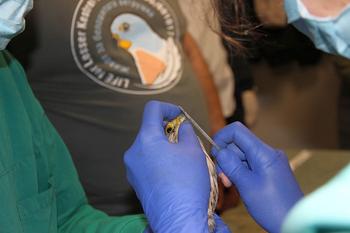 15.04.2021
As part of the activities to support the species in our country, the 'Life for the Lesser Kestrel' LIFE19 NAT/BG/001017 project's team applied a new for Bulgaria method for releasing kestrels.

The method, which releases not young but birds after a winter, was borrowed from our Italian colleagues, but supplemented by us, using a stationary, movable adaptation aviary instead.

The birds we housed in the aviary currently positioned around the species' colony in the Sakar village of Levka are 26 and hatched at the Green Balkans Wildlife Rescue Centre or those rescued from the same colony last year.

All of them spent the first almost one year of their lives in a special aviary at the Centre, equipped with models of different types of artificial nests, placed by our team in the places inhabited by the colonies of the species in our country. Thus, the young kestrels got to know their future homes!

Before being transported, the birds were examined and dewormed by the Rescue Center's veterinarians. The action was attended by veterinary medicine students from the Trakia University, trainees in the  'Student Internships - Phase 2' project of the MES, funded by the Operational Program 'Science and Education for Smart Growth', co-financed by the European Social Fund.

So, 26 kestrels have already taken the road to freedom. After living for a certain time in the adaptation aviary, the birds will be released, and our team will monitor their behavior, thanks to the marking rings on their feet.