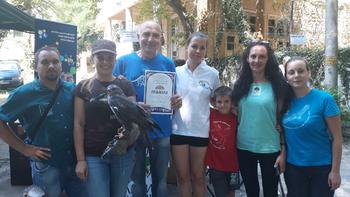 27.08.2019
The Green Balkans team and the Rescue Centre participated in the Bogorodichna stapka 2019 festival at the Stara Zagora Mineral Baths on 24 and 25 August.

We continued our summer marathon of festivals. This time we were assisted by the buzzard Misho, the Tawny Owl Chara and the Little Owl Blaga - birds that are permanently injured and couldn’t be released back into nature. On the other hand, they help us as our ambassadors, the children are fascinated by them and understand why we should not do any harm to nature around us.

On both days we released birds that had been rehabilitated and raised at the Wildlife Rescue Centre and it was the children who made this possible by letting them go. Five kestrels flew into the sky again, fourteen Mallard Ducks swam in the lake, a generation from the ducks that were confiscated last winter. The children became volunteers of the Wildlife Rescue Centre for one day and felt the thrill of returning wild animals to where they belong – to freedom in nature.

Thousands of people visited the “Bogorodichna stapka” 2019 festival. The participants demonstrated what they had learned and had fun together. We also enjoyed the programme very much – the scary kukeri, the musical performances of various community centres from the region and the country. Great local cuisine and entertainment for young and old people contributed for the great atmosphere as well.

We are really thankful to the organizers for the invitation and we hope to join again next year.


The activity is part of the project "Blue Summer with Green Balkans", possible thanks to the Public Donation Fund - Stara Zagora.

The information activities for the target species in Natura 2000 areas are presented by the project: