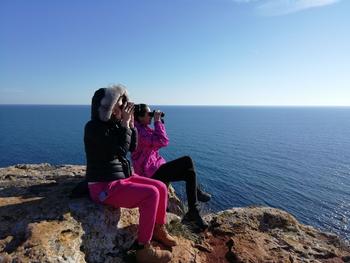 21.02.2020
As part of the international campaign for the World Wetlands Day at the beginning of February the ‘Natura 2000 in Bulgaria – New Horizons’ project team and the Green Balkans Wildlife Rescue Centre took part in the international events for celebrating the importance of wetlands and their biodiversity.

The information campaign started on the 31st of January with an open field lesson and observation of the biodiversity of the Shablenska Tuzla along with the ‘Young Scientist school group from ‘Yordan Yovkov’ Secondary School in Kavarna and their teachers.

On the same afternoon, the Green Balkans team presented information about wetlands and the international campaign in front of children from the Municipal Children Complex, Shabla. The event was situated at the Green Educational Centre in Shaba. The participants had the opportunity to learn not only about Ramsar places in Bulgaria, their biodiversity and uniqueness but the consequences of the damage and violation of natural habitats and wild animals. Dr. Rusko Petrov and dr. Stefka Dimitrova told the children about the activities of the Green Balkans Wildlife Rehabilitation Centre in Stara Zagora, why wild animals need our help and how long is the path to going back into the wild after rehabilitation; how swans covered in fuel oil could recover; how a Common Buzzard shot in each wing and in one foot can recover successfully; how a Dalmatian Pelican can continue its living with only one wing and many other examples.

In the next few days, the activities were dedicated to the Green Balkans volunteers - students from the Trakia University. All 10 of them had the opportunity to get to know the activities of the organization for the conservation of the Red-breasted Gооse, to visit the areas of work and to feel what it is like to take a monitoring point before sunrise. What are the techniques specifics of bird watching and is it easy to ‘count birds’ and much more. And for complete fieldwork experience, four teams were formed in the afternoon to look for washed ashore Cetaceans. Prepared with information for the Black Sea’s Cetaceans, armed with tape measures and a ‘Manual for collection of data from washed ashore Cetaceans’ the four teams covered about 20km of the Black Sea shore – from the Shablenska Tuzla up to the border with Romania.  And fortunately, they did not find any stranded dead Cetaceans on the shore.

They watched the European shag (Phalacrocorax aristotelis) getting ready for the upcoming nesting season on the Tyulenovo village’s rocks – the only part of the North Black Sea Coast where the species nests. The rocks in this area were the home of the Mediterranean monk seals, which for our greatest sadness has not been observed here after 1997 and is considered ‘Extinct’ from the country’s fauna. The volunteers visited Bolata, part from the Kaliakra Reserve and important wetland with one of the most beautiful beaches in the country; Kaliakra Cape and the Archaeological Reserve Yailata; they were told about the White-tailed Eagle (Haliaeetus albicilla) and saw the Red-breasted Goose (Branta ruficollis) a globally endangered species at an arm’s length.

The information activities are part of the Green Balkans campaign celebrating the World Wetlands Day within the ‘NATURA 2000 in Bulgaria – New Horizons’ LIFE7 GIE/BG/371 project.

The events are implemented within the ‘RED-BREASTED GOOSE PROJECT’.

The events wouldn’t be possible without the hospitality of the Green Educational Centre in Shabla, the participation of the Municipal Children Complex, Shabla, the ‘Young Scientist’ group and the team of volunteers from the Green Balkans Rescue Centre from the Trakia University Stara Zagora and volunteers from Plovdiv city.

The events are implemented within the project:

The information activities are within the project: