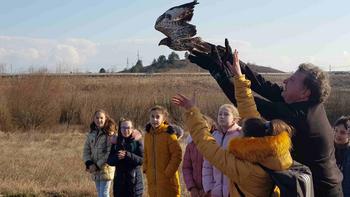 21.02.2020
The Green Balkans’ team and Radnevo Municipality gave a presentation on 'Wetlands and biodiversity' for the fifth graders from the 'Young scientist' school group at the 'St. Paisii Hilendarski' secondary school and their teacher, Ms Yana Chengalova.

Georgi Dulev from Green Balkans and Elena Cvetanova – head of the Ecology Department at the Radnevo Municipality, told students about the wetlands around Radnevo as well as the protected areas included in the Natura 2000 network and their biodiversity. After that the students had the opportunity to observe some of the species at the 'Rozov kladenets' dam. The 'Natura 2000 in Bulgaria – New Horizons' project team took part with an interesting quiz with prizes and all children received 'The Adventures of Brent, the Red-breasted Goose' book. The Minister of Education and Science – Krasimir Vylchev, who was visiting the school with his team, was also a brief guest of the presentation. The Green Balkans team surprised the children with two Common Buzzards, rehabilitated at the Wildlife Rehabilitation and Breeding Centre, which the kids were able to release at the dam.

The World Wetlands Day is celebrated on the 2nd of February every year since 1997 celebrating the singing of the Ramsar Convection in 1971.

We would like to thank our colleague, Georgi Dulev and Elena Cvetanova – Ecologist at the Radnevo Municipality, who presented new and interesting facts about wetlands in the region and their inhabitants. Also, to thank Ms Yana Chengalova and her great students for their curiosity and love of wetlands.


The released birds were rehabilitated at the Green Balkans Wildlife Rescue Centre.

The event is part of the Green Balkans information campaign celebrating the World Wetlands Day within the 'NATURA 2000 in Bulgaria - New Horizons' LIFE17 GIE/BG/371 project.