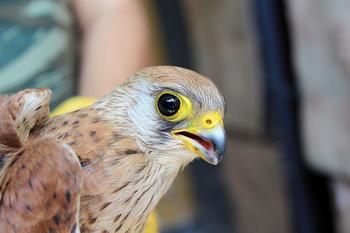 21.08.2015
This is the second wild Lesser Kestrel admitted to Green Balkans’ Rescue Center for treatment and rehabilitation.

These rare birds only breed in two locations in the country. Therefore, this wild patient is so important to our team.

Received early last week, the female Lesser Kestrel had several old fractures in different parts of the body. Despite the serious traumas and the exhaustion, the team of the Rescue Center hopes to successfully recover the patient. Currently, the Lesser Kestrel is in the intensive care unit being under constant observation and veterinary care.

This bird was received from Sredna Gora SPA. This is one of the areas with former breeding localities, where some of the locals still remember the Lesser Kestrels in the villages. Today, there is no data about Lesser Kestrels breeding in the region, but the species is listed as subject to protection within the NATURA 2000 site.

The bird received at the Rescue Center had neither rings nor other marking indicating its origin. This confirmed the fact that it did not belong to the colony established by Green Balkans in Sakar SPA and was probably a vagrant.

Green Balkans’ activities for conservation of Lesser Kestrels are implemented within “Lesser Kestrel Recovery” project funded by the LIFE program of the European Union.