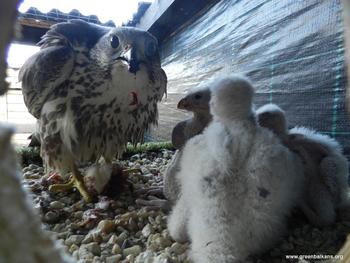 What it means to maintain a breeding colony? The challenge to breed Saker falcons

07.11.2018
The team of the Green Balkans’ Wildlife rehabilitation and breeding center initiated the reintroduction of a species gone extinct from Bulgaria – the Saker falcon about ten years ago. The maintenance of a breeding colony is a process of establishing permanent relations between the individuals, which may take a long period of time and it requires taking into consideration of many important things.
As each year is different than the previous ones, it is always necessary to make plans for the next few months in advance before the breeding season. This exactly is the challenge our team faced last week.

Currently, the Saker falcon breeding program in the Wildlife rehabilitation and breeding center includes 21 birds. After about two months their breeding season will begin and we had to make some final preparations. The most important one was to decide on how to deal with the oldest bird Romeo, who is 24 years old now. This is nearly the age limit for breeding of a Saker falcon and it was the reason to take the decision to put the male out of the breeding program. From now on, most probably he will be transferred to the Visitors’ corner in the center, where he will be the only representative of its kind. His female partner Juilet is only 10 years old and the best thing we could do for her was to pair her with a new young male.

Another important step was to make two new pairs with an Austrian bird in each, in order to increase the genetic diversity of the breeding stock. This is extremely important in the process of establishing sustainable population of reintroduced individuals. Four of the pairs bring us new hope, as they consist of birds hatched in years 2015-16 and they are just about to become sexually mature. All these changes had to be done in due time, to provide the birds enough time to get used to each other.

It was important to make medical examination of the newly paired birds just to make sure they are in fair condition and to avoid disturbing them again while they breed and raise their chicks. In addition, we cleaned the cages and adapted them to the necessities of the species.

The information activities for the Saker falcon are supported by project: