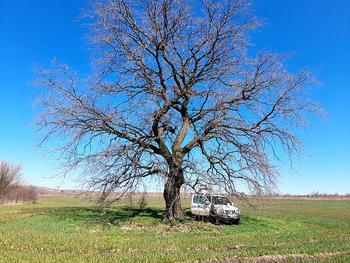 We set up 13 artificial nests for Saker falcons

Over the weekend, a team of Green Balkans, with the help of volunteers from the Wildlife Rescue Centre, set up two more artificial nests within the 'Reintroduction of the Saker falcon in Bulgaria' project.

With them, the artificial nests, which are waiting for their newcomers this spring - the falcons, become a total of 13!

We remind you that by 2018 the Saker falcon had disappeared as a nesting species in Bulgaria. The long-term efforts of Green Balkans to bring them back to Bulgaria were crowned with success and the first couple in decades is already a fact!

To this day, we continue our work on the return of the species, which, in addition to keeping pairs at the Centre and releasing their young, also includes placing artificial nests on pre-designated trees in areas suitable for nesting of this species.

We hope for newcomers this spring to occupy the nests, which were made with great desire and placed with great effort by our team and volunteers!