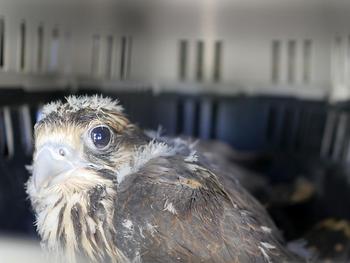 We released the last Saker falcons hatched at the Rescue Centre!

05.07.2021
Here are the last Saker falcons hatched at the Green Balkans Rescue Centre that went to freedom!

At the end of the last week, the 'Reintroduction of the Saker falcon in Bulgaria' project team released the last two youngs, hatched at the Green Balkans Rescue Centre this year, as part of project activities.

The release, in fact, is not direct, but according to the methodology, the youngs are previously redirected to adaptation aviaries placed on trees in the region of Stara Zagora.

Prior to transporting the hatchlings to their temporary home, they were examined, dewormed, and marked by the Centre's veterinarians, in the presence of trainees from the Trakia University and students from the National Professional School of Veterinary Medicine 'I. Pavlov', on practice with us.

And, a film crew, a guest of the Centre, filmed each of our activities in detail, which will be assembled later in a short film, presenting our activities for the restoration of this rare species in Bulgaria.

With this, the total number of released falcons in the wild is 17. Our field team will continue to take care of the young birds until the last one leaves the area of ​​the hacks.