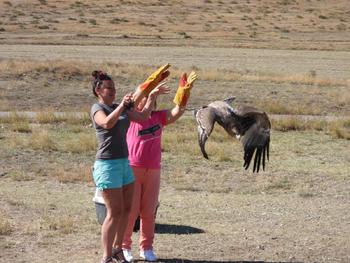 03.10.2022
At the end of last week, a young Imperial eagle was released from the Green Balkans Rescue Center.

The bird was raised by the Center's team after being adopted as a very young chick.

After his reception, and the initial care, the eagle was placed in the aviary of the pair of imperial eagles, long-time residents of the Rescue Center. There, under the watchful eye of the adults and copying their behaviour, the eagle spent nearly three months. During this time, it learned to fly and feed itself.

And so, in no time, the day came when we had to part with him. Before that, he went through the mandatory examination and deworming by the Center's veterinarians. We also fitted him with an identification ring and a satellite transmitter so we could monitor his life.

The bird was released near the Sliven village of Kamen, and our assistant in this, a not-easy task was the director of the NP "Sinite Kamani", with whose support the eagle took its first flight into the wild.

We also thank YUDP ​​- Sliven, who honoured our invitation and became part of the event.