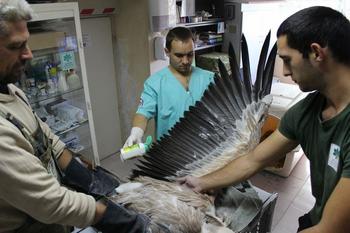 We received a new Griffon Vulture from Allwetterzoo Munster

01.10.2015
On September 29th we accepted a young Griffon Vulture, received within the recently started Vultures Back to LIFE14 NAT/BG/649 Project. The bird arrived at 9 pm on the wings of a regular flight from Frankfurt to Sofia. The vulture was supposed to travel to the Wildlife Rescue Centre at Green Balkans in Stara Zagora for a short quarantine and then get moved to an adaptation aviary in the Balkan Mountains for release.

This was the original plan, which got turned upside down, once a driver, a car and a bird got stuck even before leaving Sofia, as the vehicle got broken. Such situations, of course, never happen in daylight and in the working hours of the regular car-repair services and after an hour of frenetic organization of possible rescue operation, the team finally called an emergency truck, which loaded the Opel, the vulture and the completely upset driver and towed them all the way to Plovdiv. The funniest part was that, in the middle of the night, the break-down mechanic recognized the car and remembered loading vultures on it once working at the airport cargo. Well, he now got the chance to not only load a vulture, but the entire car.

The crew arrived in front of the service at 2 am, where it turned out that a fellow-Volkswagen called for help was also unable to load the massive transport box with the bird. Can you imagine the confusion of the mechanics, who found both a car and a vulture in their yard in the morning! At that time we had managed to find a third vehicle, which managed to successfully load and transport the vulture, which had already lost all hope in Bulgarian hospitality.
In Stara Zagora the bird was welcomed by our team of veterinarians and experts, who examined it and made sure that the midnight adventures have not broken its spirit (especially as compared to the driver’s).

The young German bird is already in the company of yet another Griffon, which is currently undergoing treatment, so  none of them feels alone and forsaken. Once we make sure that the new-commer is feeding and socializing well, we will move it to an adaptation aviary and set him free next spring.

Our newest vulture hatched only in May this year in Allwetterzoo Munster, Germany. It is the fifth vulture we are getting from there. Three of the birds have long been released, while the fourth, unfortunately, had some health issues and could not recover.

We are extremely grateful to our colleagues for their trust and kind cooperation and we hope to continue our joint work for the restoration of vulture populations in Bulgaria!