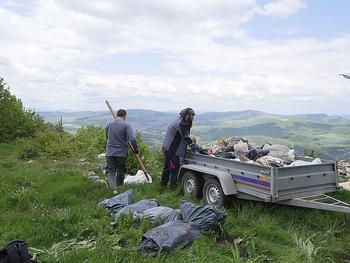 We fed the Egyptian vulture pairs in the area of ​​Provadia

09.05.2022
In early May, representatives of the "Egyptian Vulture New LIFE" project team and volunteers from the Green Balkans Wildlife Rescue Center brought more than half a tonne of food to the wild Egyptian vultures in the Provadia region. It was placed on a specially designated feeding ground, not far from the village of Partizani.

One part of our team also worked on extending and strengthening the existing fence on the site. The fence is very important because it deters terrestrial predators, such as foxes, jackals and stray dogs, which also feed on carrion. Then we mowed the grass, for more successful landing and take-off of the birds during feeding.

At the same time, another part of our team moved to the second place in the area where we left food and used the opportunity to briefly monitor the known nests of Egyptian vultures in the area, waiting for returned from migration and nesting birds.

Thanks to these observations and information from local ornithologists, hitherto unknown active nests of the Peregrine falcon and crow were discovered.