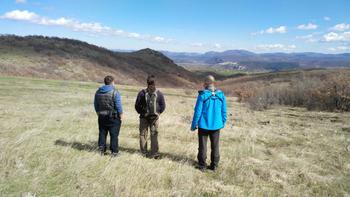 19.03.2018
Last week experts of Green Balkans and BSPB visited the area of Potochnitsa, the Eastern Rhodopes in order to examine potential locations for the construction of an adaptation aviary for the release of Egyptian Vultures.

The visit was held within the major international project Urgent Actions to Strengthen the Balkan Population of the Egyptian Vulture and Secure Its Flyway (LIFE16 NAT/BG/000874), where Green Balkans is among the Associated Beneficiaries.

The project provides for the release of young Egyptian Vultures using an adaptation aviary. The location was thoroughly examined, the parameters of the aviary were discussed, as well as its exact location and the characteristics of the terrain.

By the end of March the aviary should be installed at the selected location. It will initially host four young Egyptian Vultures, granted to the project through the kind cooperation of Mr. Antonin Vaidl. The birds hatched last year in Schonnbrunn Zoo, Zoo Prague and Zoo Jerez.

They will stay in the aviary until mid-May and they will then be released. We expect that the time spent in the aviary would be enough so that the young vultures adapt to the site and stay in the area until the time for migration has come. In the meantime, the project team will ensure that they find sufficient food.