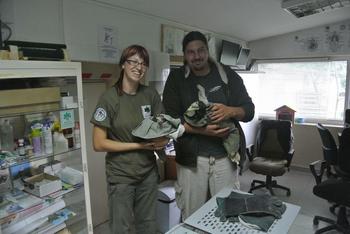 We accommodated two new Egyptian Vultures from the Czech Republic

13.07.2015
One of the youngsters hatched in 2013 in Praha Zoo, while the other one - in 2014 in Zlin Zoo, Czech Republic. The Prague vulture is actually descendant of a Bulgarian bird kept at the zoo, so for him this is like returning home.

The birds were brought by Mr. Antonin Vaidl, bird curator at Praha Zoo and head of the Egyptian Vulture Endangered Species Programme (EEP) at the European Association of Zoos and Aquaria (EAZA). Thanks to Mr. Vaidl, in 2013 the city Council of Prague granted funds for the construction of new aviaries for accommodating the globally endangered species at our Wildlife Rescue Centre at Green Balkans - Stara Zagora. In the beginning of 2014, we completed the specialized enclosure to offer space for the Egyptian Vultures to like each other and form breeding pairs.

Until recently the Wildlife Rescue Centre had three female Egyptian Vultures and a single young male, accepted with an amputated foot, which might not be able to breed. This is why in 2014 we aceepted a young male hatched in Sofia Zoo. In July 2015, in order to increase the choice of the picky females and improve the chances of forming more pairs, we happily admitted the two young males from the Czech Republic.

We would like to cordially thank Mr. Vaidl for his kind cooperation and invaluable support!

We would also like to thank the teams of Zoo Praha and Zoo Zlin for their trust and we promise to keep you all posted!