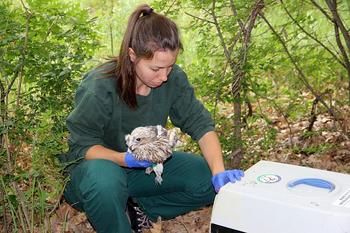 28.05.2021
Today, two more Saker falcons were transported to an aviary on their way to freedom.

The birds were hatched this year at the Green Balkans Rescue Centre, as part of our team's work to restore the species in our country.
Before leaving the Center, the 'Reintroduction of the Saker Falcon in Bulgaria' project team and the veterinarians examined, dewormed, and marked the young birds with colored rings.

We remind you that a little earlier in May four more Saker falcons, hatched this year again at the Centre, were placed in the aviary in nature. These birds are already flying in the sky. Ah, our team continues to take care of them, leaving them food in designated areas daily.