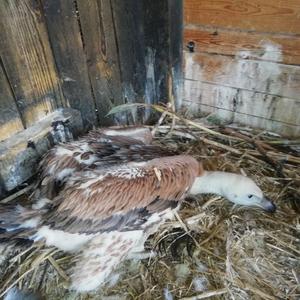 12.04.2021
Within one breeding season, the Griffon vulture pair in the Green Balkans’ Wildlife Rehabilitation and Breeding Center successfully managed to raise two baby vultures what is a rare success.

This was possible thanks to the “double clutch” method used by the Center team since years. The first baby vulture was placed in an incubator and then brought back to its parents, now it’s turn of the second one to take its place in parents’ nest.

Since taking care of two little newly hatched will be difficult for the pair and there is a risk that the parents will not be able to feed them both, we accommodated the older one in an adaptation aviary. There it will have visual contact with parents in order to avoid imprinting on humans.

This way Griffon vulture parents can focus on taking care of the younger one who is only two weeks old.

When both young vultures will be ready to leave the nest and start making first attempts to fly, they will be settle in an adaptation aviary preparing them for release in the wild.

If you want to become patron of the two little chicks, to name and support them during their first months, visit here.
Contacts: