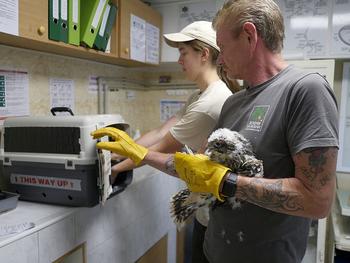 21.06.2021
Three more Saker falcons, hatched at the Green Balkans Rescue Centre in 2021, were sent to the adaptation aviaries in nature, on the way to freedom!

Before that, the birds were examined, dewormed, and marked by the Centre's veterinarians.

The young falcons will share their temporary home with three other birds of the same species that were moved there a few days earlier.

It is interesting that apart from this year's already flying hatchlings, the young falcons were greeted by our longtime acquaintance - the falcon, marked with a blue ring 1K, released at the same place in 2016.

We used our field trip to free a young sparrowhawk, a patient of the Centre's clinic, who had undergone the rehabilitation process and was ready to go wild!

12 are the already hatched young birds at the Rescue Centre in 2021 and released into the wild. Our field activities continue until the end of August. Expect much more interesting news from us and the falcons!