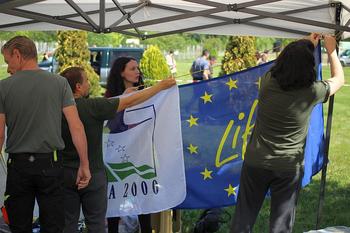 18.05.2021
Over the past weekend, the 'Life for Lesser Kestrel' LIFE19 NAT/BG/001017 project team participated in three initiatives related to promoting its work for the return of the little falcons in our country.

One of the events was the White Stork Festival, traditionally celebrated in the village of Belozem. In the fifteenth edition of the festival, the Lesser Kestrel was presented to all guests and residents of the village.
Through models and banners, our team told about the benefits of the falcon and the efforts that Green Balkans is making to restore it.

The Festival 'Bulgarian seed' in Sevlievo was the other place where the Lesser Kestrel was present. Thanks mainly to the volunteers of the Rescue Centre, veterinary medicine students at the Trakia University, participants in the 'Student Internships - Phase 2' project of the MES, funded by the Operational Program 'Science and Education for Smart Growth', co-financed by the European Social Fund, the guests of the festival managed to touch the magic of wild animals and gained valuable knowledge about the species and its conservation. Undoubtedly, the Common kestrel Vladko, the Common buzzard Misho, and the Little owl Blaga, with whom everyone could get acquainted, also helped.

On the other hand, our team at the Centre for Environmental Protection Activities in the Sakar village of Levka received children from the Ivan Vazov Primary School in Svilengrad. During their visit, the children had the opportunity to see the Lesser kestrel's colony, to learn more about their behavior in nature, the threats to the survival of the species, and the activities we can all take to save it. And, with the help of specially built video surveillance, the children were able to peek into the nesting platforms, the Lesser kestrel's homes, and to observe with what love and tenderness the feathered parents raise their generation.

The information activities described above are part of the 'Life for the Lesser Kestrel' LIFE19 NAT/BG /001017 project on the European Natura Day 2000, which is traditionally celebrated on the 21th May.