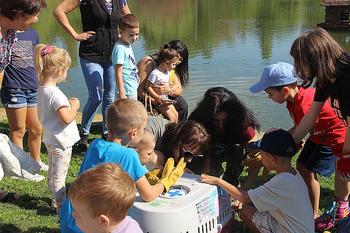 Three events at the Rescue Center on the national holiday of September 6!

09.09.2022
We, from the team of the Green Balkans Rescue Center, celebrated the national holiday of Bulgaria, September 6th, in the only way for us - by working!

But, it wasn't just a day's work. It was a day in which we, with the help of many volunteers, residents and guests of Stara Zagora marked the end of our rather busy summer season.

Within one day, we organized two events and were guests at another, during which we released a total of 45 animals from the Rescue Center.

But, let's start from the begging!
First, in the morning we were at Zagorka lake in Stara Zagora. There, together with many children and their parents who came especially for our event and bystanders, we released 14 mallard ducks. They were part of the mallards hatched here this year, a generation of parents confiscated during illegal hunting.

Then, in the early afternoon, we left the Center with another group of volunteers to the small forest in the village of Bozduganovo. There, again with the help of the guests of the event, we released 17 turtles, 10 hedgehogs and one Montagu's harrier.

In the evening, however, we were guests at the celebration of our friends from the village of Malko Kadievo. There, as a compliment to the hosts and thanks for the long-term cooperation in our activities on the restoration of the saker falcon in Bulgaria, we released three common kestrels hatched in the Center, naturally not without the participation of the guests of the event.

We thank the students of veterinary medicine at Trakia University, our interns, for the irrevocable help they provided us this time as well.