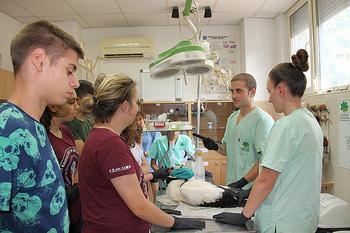 05.08.2022
During the summer vacation, some young people prefer to spend their time not only with games and entertainment, but also in something useful, such as volunteering, for example.

Precisely in front of such volunteers, at the Rescue Center yesterday the "Life for Lesser Kestrel" LIFE19 NAT/BG/001017 project team, funded by the LIFE program of the EU, conducted training on the topic "Rendering first aid to wild animals in distress", with an emphasis – the Lesser kestrels.

During the training, the young conservationists had the opportunity to familiarize themselves with the rules for first-aid, emergency and medical aid, as well as to do part of the manipulations themselves - applying a bandage, giving water, immobilizing a limb.

In addition, the volunteers also learned interesting details about the lives of both Lesser kestrels and wild animals in general.

And finally, as a reward for a job well done, each of the participants received a canvas bag with the project logo.