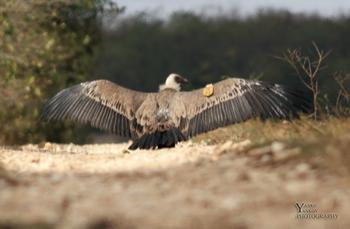 The unique story of the Griffon vulture K4N, the environmentalists and the windfarms near the Black sea.

17.10.2017
The Griffon vulture K4N, which was released on September 14th 2017 from the adaptation aviary in “Sinite kamani” Nature park” within the “New life for the vultures LIFE14 NAT/BG/649” project, spent three months in the summer in Eastern Bulgaria. Before the bird was released it was marked with satellite transmitter and regular moniotoring of its movement was made.

Thus, we found out that К4N also visited Romania for short, where it stayed in the area of Tulcea and on its way back it was found in the wind farm near the city of Shabla. It is well known that the hovering birds near such facilities are in danger of collision and for that reason the reliable owners of wind farms apply systems for minimization of this risk.
When it was reported that the bird has landed in the windfarm near Shabla, the team of “New life for the vultures” project posted a message in one of the most popular groups on facebook on birding  subject - “Birds in Bulgaria” with a request to the environmentalists nearby to visit the place and check out the condition of the bird and wether it needs help.

The early warning system of “St. Nikola” windfarm saved the life of the Griffon vulture K4N.

On October 08th 2017 the field ornithologists on duty from the “St. Nikola” windfarm, Yanko Yankov and Kiril Bedev learned about the Griffon vulture in distress in the area of the village of Gorichane, Shabla municipality. By the coordinates provided, they found the bird in an agricultural field in poor general condition. Actions were taken to provide food and guard of the bird. In the next two days despite the bad weather – strong wind and rain, the bird was fed several times and recovered its strength. With the warming up of the weather the bird left hazardous area. With the mutual efforts of the field ornithologists team of “St. Nikola” windfarm and the operators of the windpark in the region a coordinated stopping of the turbines was undertaken on the route of the still inexperienced Griffon vulture. This stopping of the turbines is part of the work of the early warning system, which has been applied in Windpark “St. Nikola” since the park was put into operation in 2010.

Later on, exact coordinates were received by the team of the “New life for the vultures” project and it was reported that the Griffon vulture has left the area of the windfarm near Shabla and Kaliakra safe and sound.
The process of adaptation to life into the wild continued several more days as the bird was reported near the vultures feeding site in the Eastern Balkan Mountains but finally, most likely attracted by a flock of migrating birds (Lesser spotted eagles and/or Black storks) it has reached Istranca mountain.

In the area of Lozenets on October 15th it was captured by local civilians and sent to the Wildlife rescue center – Green Balkans in Stara Zagora. Students participaring in the students` practices programme by the Ministry of education and science, which is being realized in the Rescue center at the moment, contributed to the transportation of the bird. Our veterinarians will take good care of it and we hope that the vulture will fully recover and will be ready to be released as soon as possible in the area of Eastern Balkan mountains. Our experience so far proves that re-released birds adapt much better and more successfully to life into the wild.
The photos and the video are given by Pavel Zehtindzhiev and Yanko Yankov, for which we would like to sincirely thank them!