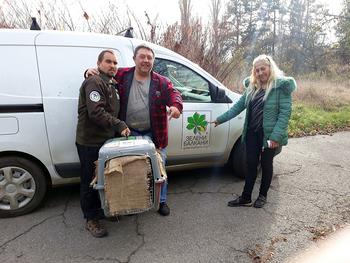 15.12.2019
A few days ago, a team from Green Balkans transported the young Egyptian vulture Ana to Prague Zoo. We remind that the bird was hatched last year in that same zoo. Subsequently, it was donated to the "Egyptian vulture New LIFE" project, part of which is the Wildlife Rehabilitation and Breeding Centre.

The bird was released in the wild later that year via an adaptation aviary. Unfortunately, at the beginning of 2019 it was found in Turkey, and after many twists and turns our team together with colleagues from The Bulgarian Society for the Protection of Birds managed to transport it back to Bulgaria. The bird was taken to Sofia Zoo where a 30-day quarantine period followed, in which we had to decide its fate. As there were serious doubts about the bird's ability to survive in the wild on its own, we took the decision to take it back to Prague where the EAZA Egyptian vulture coordinator is - Anton Vidal.

He would be the person to further relocate the young vulture to a zoo, in which the bird would form a pair and as part of the project their offspring would be released in the wild! Together with Ana, to Prague Zoo were transported also four White storks which have been treated at the clinic of the Rescue Centre but are with permanent disabilities, and will spend their lives in the zoo.