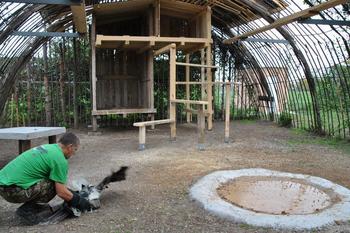 20.10.2014
The aviary was reconstructed following the visit of one of the greatest experts on captive breeding of Bearded Vultures, Dr. Alex Llopis, organized within the Vultures Return in Bulgaria LIFE08 NAT/BG/278 Project. After discussing the possibilities, we secured a new, bigger nesting platform, suited with a convenient ladder, a mud bath, new water pool, feeding platform and new perches. The aviary now offers much more options for the shy and timid male to hide from his dominant and sometimes aggressive wife. We hope that this year he would gain courage, while she would finally answer his interest.

Our birds have beene together at the Wildlife Rescue Centre since 2008. The female hatched in 2006, while the male is a year older. Last year was the first year the pair showed some breeding behavior, yet the two vultures started to construct two separate nests and the female abruptly turned down all the signs of shy interest from the male.

Bearded vultures in captivity start breeding after their eight-ninth year. Their breeding season, unlike most birds, become already in winter, as early as December - February, the female lays a single, most often two and very rarely three eggs. The incubation starts with the first egg and takes 52-56 days. Despite the fact that the pairs usually have two eggs, in nature always only a single chick survives.

We hope that the renewed aviary, combined with the improved conditions would melt the heart of our stubborn female so we would finally have our first egg at the Wildlife Rescue Centre of Green Balkans - Stara Zagora.