The new patients at the Wildlife Rescue Center 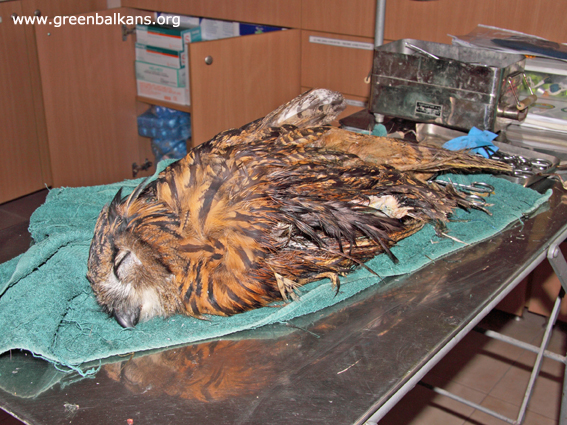 Eagle Owl (Bubo bubo)
This majestic bird was received at the Center in awful condition. One of its wings was not only injured, there was no flesh on it. With no tissue on the wing, it is impossible to say what caused the injury. Whatever the reason, the bird had suffered a lot while the larvae of various parasites fed on the flesh of its injured wing. It couldn’t eat for a long time, which resulted in a dramatic drop in the bird’s weight, up to 100 gr below the critical minimum for this particular species.
Wing amputation was inevitable. The bird endured the operation, came out of the anesthesia with difficulty, and a day later its strength gave way. One magnificent bird less in the night sky...
Our special thanks go to Andreana Trifonova from the Rhodope Project and Engineer Ekaterina Gadjeva from the Regional Inspectorate of Environment and Waters in Smolyan, for being compassionate to the tragedy of this bird and contributing to its transportation to the Rescue Center.

Otter (Lutra lutra)
The young otter was received at the Rescue Center from the region of Dimitrovgrad with the assistance of Nikolay Apostolov – mayor of the village of Raynovo, and his wife. The otter was bitten by a dog and could not move its hind legs. These good people that found the otter took it to a veterinary clinic, where it was kept for days without being treated and fed. Its condition got sharply exacerbated and the people 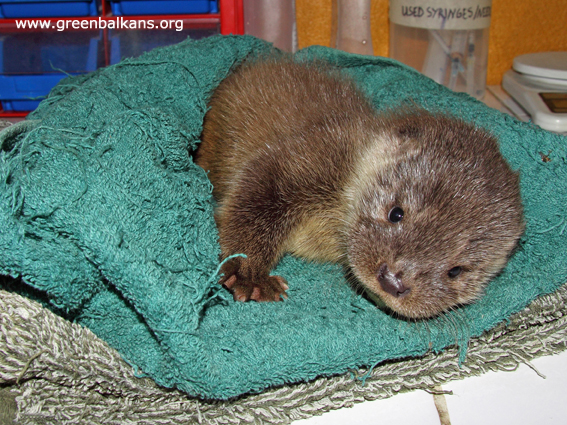 decided to look for help somewhere else.
When the otter was received at the Rescue Center it had hypothermia and was seriously dehydrated. Despite the urgent measures taken to stabilize its condition, the otter died a couple of hours later. The necropsy revealed holes in the stomach, through which the stomach contents emptied directly into the abdominal cavity. Unfortunately, in cases like this we are
helpless... 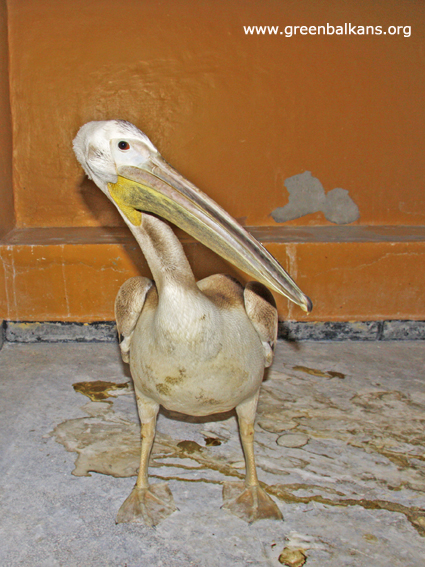 White Pelican (Pelecanus onocrotalus)
The pelican Pelin was received after it had suffered a disease in the wild, which could no longer be diagnosed. The bird was in a terrible condition. It couldn’t stand up, staggering and falling all the time, neither could it swallow food by itself.
At first we expected further exacerbation of the bird’s condition. We had to feed the pelican by putting the fish into its gullet right to the stomach.
Suddenly, Pelin started to stand longer and longer on its feet without falling down. One day, it even gulped a fish by itself and was apparently proud of this achievement. This was the beginning of the recovery of the giant baby. At present Pelin inhabits a big cage in the yard, sharing it with a Gray Heron and a White Stork, and we are wondering how to feed its co-tenants, because Pelin eats up everything. 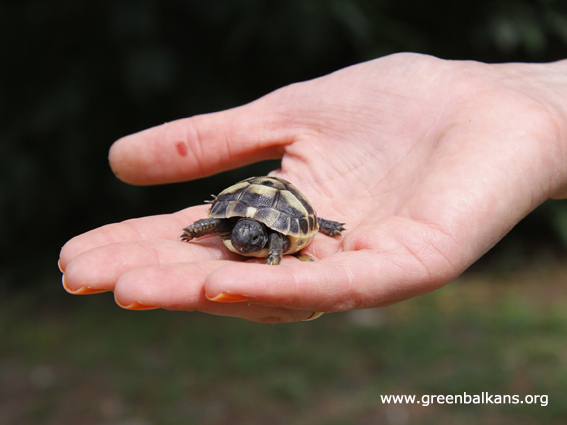 Hermann’s Tortoise (Testudo hermanni)
This tiny bijou was received from the region of Yambol without any injuries. It was amazingly small and the people who found it were worried whether it could survive by itself. Its shell is still soft and has a small dimple, where it was pecked by a bird, but there is no wound. It enjoys a good appetite and adores fruits. While eating a water melon, the tiny tortoise likes falling asleep in it.
A few days after its arrival, two huge tortoises were received at the Rescue Center. They had been kept as pets for 30 years. The lady that kept them is too old now and cannot take care of them anymore; therefore, she decided to bring them to the Rescue Center.
In the picture you can see the huge difference between the baby and the adult individual.
We have to remind that taking tortoises from the wild is exactly the reason why these species are threatened with extinction. Lots of people keep tortoises in their yards, with no natural breeding conditions; moreover, quite often the animals do not have partners for reproduction. In the rare cases when they produce offspring, the babies are not released into the wild. This results in a sharp decline in the number of tortoises in the wild.
Taking tortoises from the wild, keeping them as pets, as well as injuring and killing them is prohibited by the Biological Diversity Act. 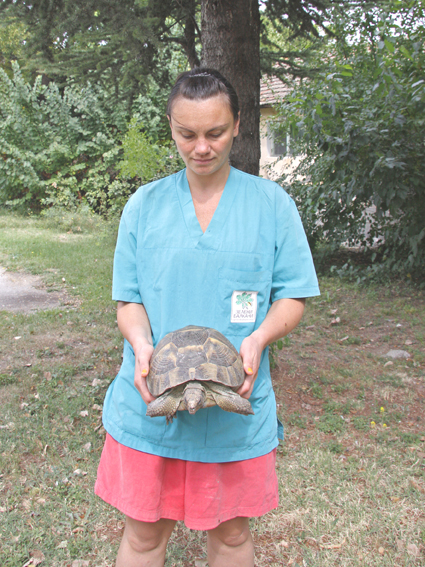 At the time when we received the Hermann’s tortoise baby, another tortoise baby, this time of the species Iberian Tortoise, a bit older than the first one, was sent to the Rescue Center from Sofia. Well, this tortoise wasn’t from Sofia, but the man who sent it to us had received it as a pet present. This man, however, being aware that this was a protected species, decided to return the tortoise to the wild, where it belonged.
We received the tortoise carefully packed – that’s why we took a picture of the box.
The baby tortoises and their bigger fellows will be “stored for the winter” to hibernate. Next spring they will wake up to find their new lives in the wild. 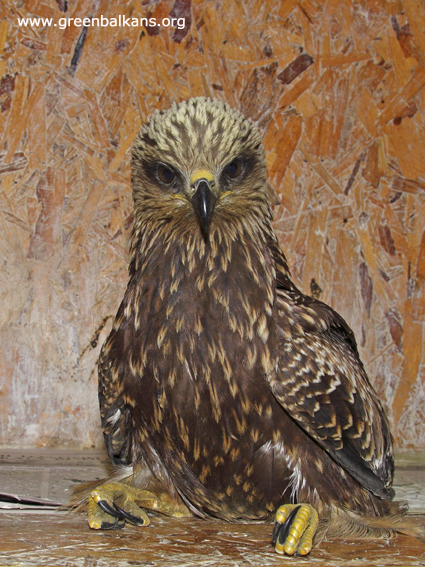 Black Kite (Milvus migrans)
This incredibly beautiful and fine bird of prey was received with motionless legs due to neurological disorder. We do not know yet if it will recover. The treatment has already produced some effect, but with neurological disorders one never knows for sure how successful the recovery can be. It made its reputation as one of the most loud-voiced patients. Its trembling voice could be heard at any time; it is sociable and curious.

Corncrake (Crex crex)
Perhaps you have heard that the Corncrake is a globally threatened species. This Corncrake was received at the Rescue Center with a wounded wing and impaired movement of one of its legs. The wing is getting better now, and the movements of the leg become more and more coordinated. 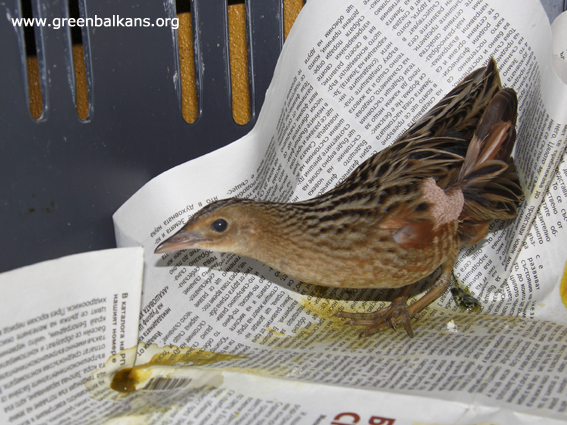 Talking about feeding and caretaking, this is definitely a hard patient. It gets easily frightened and starts crashing against the walls of the cage. Finding the food it likes was another difficult task; however, we found suitable substitutes for its natural menu. We will wait and see if the bird will be fully recovered and able to survive in the wild. 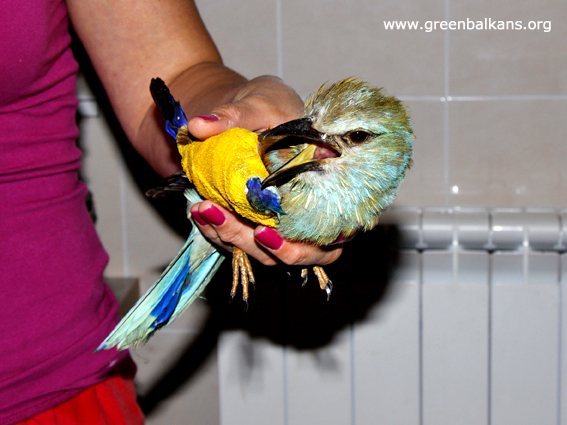 Roller (Coracias garrulus)
The Roller is not a rare bird, but because of its secretive life it is still unknown to many of us. It is one of the most brightly tinted birds in Bulgaria. The Roller is a migratory species, feeding mainly on caterpillars and larvae of various beetles.
This patient was received with a bad wing fracture. The wing could not heal up. The bird could hardly get used to the food we provided as a substitute for its natural diet. Gradually, it started feeding on its own. 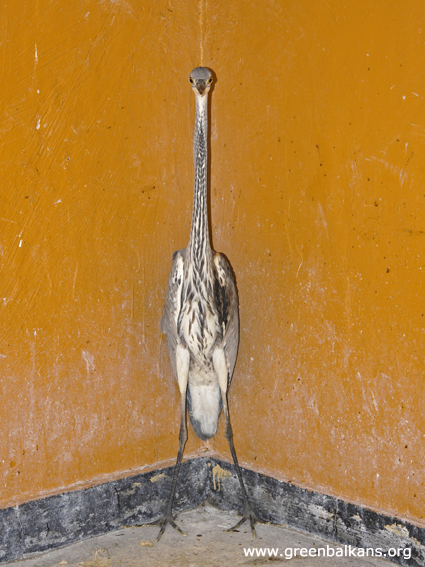 Gray Heron (Ardea cinerea)
This Gray Heron was shot in the wing. It recovers well after the operation. If anyone entered the room where it was kept during the intensive treatment, it would pretend to be invisible, standing still in the corner of the room. This behavior is common for herons and they demonstrate it successfully in the wild – when hiding in the reeds, for example.
Later the heron was moved and now it shares a big cage in the yard with the pelican Pelin and a stork from Hungary.

White Stork (Ciconia ciconia)
The last White Stork received at the Rescue Center had a Hungarian ring. It isn’t wounded. It is just too small and weak; therefore it will stay with us until it gains strength. The stork shares a cage with the Gray Heron and the pelican.
We informed the Bulgarian Ornithological Centre about the patient with the ring. They are going to contact their Hungarian colleagues; after that we will receive useful information such as when and where the bird was ringed, in order to track its migration.