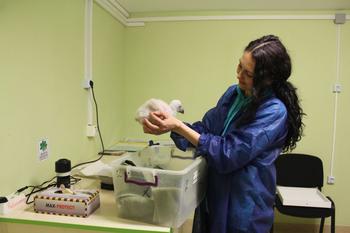 21.04.2021
We would like to thank the donators Kostadin Karadzhov and his family as well as Ekaterina Ivanova and Plamen Noninski who became patrons of the vultures.

We remind you that this year the Griffon Vulture pair in the Green Balkans’ Wildlife Rescue and Breeding Center (WRBC) has two (!) newly hatched chicks!

In nature it is extremely rare to hatch two little ones, and it's even rarer both of them to be successfully raised.

But … "assisted reproduction” is also used with birds. The baby chicks were hatched with the help of WRBC team.

First we took away the first laid egg from Griffon vulture pair which stimulated them to lay another one. Both eggs were placed for incubation and hatched in the WRBC incubator. Our team was taking care of the newly hatched vultures during their first days when baby chicks are most vulnerable. Hoping that there is a bigger chance to be successfully raised, we put back the young birds with their parents. Unfortunately, birds are not like us people and it is not possible to hand-feed vultures because they would not be able to live in wild nature after that, they will be imprinted on humans (meaning they were raised by people and identify with humans rather than other vultures).

The life of the two vultures will not be easy. The chance both to be successfully raised until their release is not big. Moreover their future survival in wild nature will face a lot of challenges. Follow their future adventures on the Green Balkans’ web site.

Once again we express our warm gratitude to all donators!