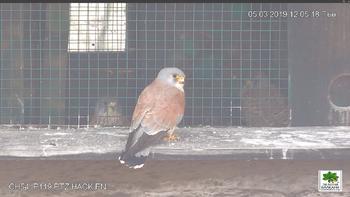 12.03.2019
Spring is almost upon us and so are the lesser kestrels at the Green Balkans Wildlife Rehabilitation and Breeding Center in Stara Zagora.

The first three birds of the species came back to the Rescue Center - two males and a female, all 3 hatched in 2017 within the species reintroduction programme and were released at the Rescue Center. The first pair for this year are the KVK and KVV. It is quite interesting that those same three birds were the first to return to the Centre last year.

More than 40 young kestrels were released in 2017, and 25% of them came back to nest at their birth place.

In 2018 we managed to hatch and release over 30 birds, so all in all, we’ve released over 70 birds for the last two years. We are hoping to see more kestrels return in the following weeks and maybe some of them will be new wild additions to the colony.

The lesser kestrel release at the Rescue Center began after the Levka colony reached its peak as a result of the ‘Greater chance for Lesser Kestrel (Falco naumanni) in Bulgaria’ LIFE11 NAT/BG/360 project. The project team decided the same methodology can be applied at the Rescue Center aviary and help bring the species back to the Stara Zagora sky.


The Green Balkans Wildlife Rehabilitation and Breeding Center information activities on the lesser kestrel are implemented within the ‘NATURA 2000 in Bulgaria - NEW HORIZONS’ LIFE17 GIE/BG/000371 project.