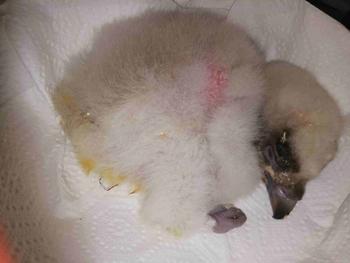 26.02.2019
There was great excitement at the Green Balkans Wildlife Rehabilitation and Breeding Center in Stara Zagora yesterday when the first baby for the season - a bearded vulture was hatched. This is going to be the only bearded vulture to hatch at the Rescue Center for this year as the couple had only one egg.

The first chick at the Rescue Center for 2019 hatched 55 days after the egg was laid, exactly when we were expecting it. Our team had to help it a little, after which we transferred the chick in an incubator. A couple of hours later, the baby bird was dry and warm.

This is only its second day and it is currently trying to learn how to properly eat, which is still hard work and the baby bird needs a short rest after each bite. We are going to take care of the chick for a couple of days to make sure it is developing well and will bring it back to its parents after that.

This is the sixth chick of the only breeding couple of bearded vultures in our country.

When the bird is old enogh it is going to be released as part of the European Endangered Species Program (EEP). As we are also part of it, we are donating each bearded vulture that hatches at the Rescue Center to the program.

We would like to thank Alex Llopis from the Vulture Conservation Foundation (VCF) for his help and guidance with the chick hatching and its raising, and for sharing his experience.


The Wildlife Rehabilitation and Breeding Center information activities for the bearded vulture are implemented within the 'NATURA 2000 in Bulgaria - NEW HORIZONS' LIFE17 GIE/BG/000371 project.