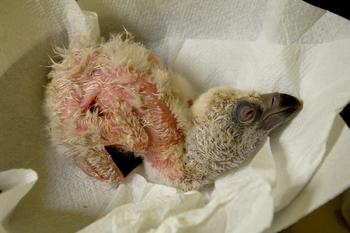 24.04.2017
The first baby Griffon Vulture from a pair nesting in Central Balkan hatched on 24.04.2017. This is the first confirmed breeding of Griffon Vultures for more than 5 years. Unfortunately the baby did not hatch into the wild but in the incubator of the Wildlife Rescue Centre at Green Balkans, so we would like to remind you its incredible story.

The parents of our baby are Griffon Vultures tagged K3H and K6C, released within the Vultures Return in Bulgaria project. The female, K3H, was received as a donation from Lesna Zoo Zlin in 2012, released on 03.08.2013 from the adaptation aviary in Central Balkan. The male – K6C, also hatched in 2012, originates from the area of Madrid, Spain, was shipped to Bulgaria in 2013 and released on 23.03.2014 from the same aviary in Central Balkan. In June the same year K6C was trapped near the village of Tarnichene, was then re-admitted at the Rescue Centre for treatment, returned to Central Balkan in July 2014 and re-released.

The young and extremely inexperienced birds had laid on the ground, close to a path, used by people and cattle. The team of the Vultures Back to LIFE14 NAT/BG/649 Project got quite confused as Griffon Vultures usually nest in remote cliffs high above the ground. The egg on the ground was extremely vulnerable, as the bird was often disturbed by visitors and the chick would have almost certainly been stamped by the cattle or eaten by the shepherd dogs, foxes or jackals. This is why our team had to make an extremely tough and responsible decision, after coordination with the Regional Inspectorate of Environment and Waters – Stara Zagora. In order to save it, on 13.03.2017, the egg was taken and immediately transported to the incubators of the Wildlife Rescue Centre in Stara Zagora. Here it was measures, weighted, examined by an ovoscope and set in an incubator. As an even greater surprise, the egg turned out fertile, alive and well incubated.

The good news is that it is completely healthy and well-developed. It will be reared by the experts of the Rescue Centre and we will keep you posted about its progress. Unfortunately, we cannot bring it back to its parents in the Central Balkan, as it would have no chances to survive in its nest. Despite that, we will do all we can to raise it so someday it flies free where it belongs - in the Balkan Mountains of Bulgaria.

We are also left with the hope that the young pair would gain experience and courage so their next chick hatches successfully into the wild.