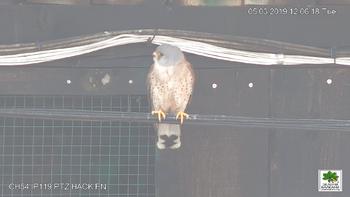 06.03.2019
Yesterday, the team of the Green Balkans’ Wildlife rehabilitation and breeding center spotted the first Lesser kestrel to return for this year in the sky above the Center.

The bird is male, marked with ring, which, unfortunately, we cannot yet identify, so the guest still remains anonymous.


We would like to remind that two years in a row more than 80 juvenile Lesser Kestrel have been hatched in the aviaries of the Center as part of the activities of the project “Greater chance for the Lesser Kestrel (Falco naumanni)” LIFE11 NAT/BG/360. The five-year project, implemented by Green Balkans in the region of Sakar mountain has contributed to the return of the species in Bulgaria, after decades of extinction from our nature.

The release of birds from the Rescue center is part of the subsequent activities after the project, aiming the dispersal of the species in different parts of the country. We hope that the newly arrived male will find his partner and will nest in some of the nest boxes, installed in the yard of the Center by our team.