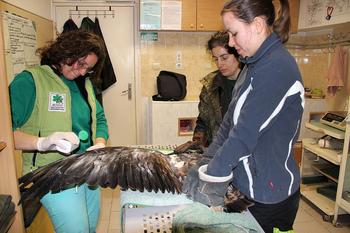 12.02.2019
At the beginning of the week the Green Balkans Wildlife Rehabilitation and Breeding Center team carried out a scheduled prophylactic exam of the imperial eagles at the Center.

The veterinarians at the Center examined the birds, trimmed their talons and beaks and carried out external and internal deworming procedures.

Meanwhile another team took care of the birds’ aviary, they dewormed the walls, floor and the nests and cleaned up the place. We made some adjustments to the nesting platforms with the aim of attracting the birds for the upcoming breeding season.

We hope this year’s breeding season will be successful and we will have baby eagles at the Center.

Until then we will keep on taking care of our flying tenants and will secretly keep an eye on them via the video surveillance at the Center.

Imperial Eagle
In the past, the Imperial Eagle was one of the most common birds of prey. Today, the population of the species in the country is estimated at only 25-30 pairs, concentrated in the Sakar Mountains and the Derventski heights. Critically endangered, the species and its habitats are protected by the Natura 2000 ecological network


The Wildlife Rehabilitation and Breeding Center information activities on the imperial eagle are implemented within the ‘NATURA 2000 in Bulgaria - NEW HORIZONS’ LIFE17 GIE/BG/000371 project.