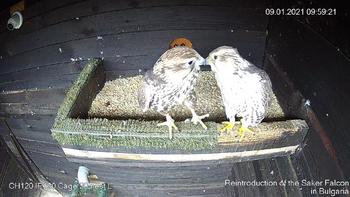 19.01.2021
We started the week with some great news. This time it came from the “The Saker Falcon Return in Bulgaria” team and to be more precise – from the man in charge for the breeding, who informed us that 2 of the 12 couples of Saker falcons living at the Centre are copulating.

The two couples are Arvin and Gogo, and Willow and DJ. We are happy to inform you that this year Gogo is among the winners. He is the first hatched Saker falcon at the Centre far back in 2011, as well as the first one hatched in Bulgaria for decades. There is something symbolical in the fact that he and his partner Arvin are among the first copulating.
But that is far not all … It turned out that the other 9 out of 10 couples are also not wasting their time. All of them demonstrate distinctive “marital” behaviour such as the male giving food to the female, and “digging” pits in the gravel of the nesting platform.

As some of you may know, for more than 10 years now, the team of The Rescue Centre of Green Balkans has been working for the recovery of the Saker falcon in Bulgaria. The working method involves couples of birds who live and breed in specially organized aviaries at the Centre, and then their hatchlings are freed into nature out of cages, fixed high up in the branches of trees we have selected in advance.

And so, we mark the beginning of the breeding season of the Saker falcons of 2021! Let’s wish for many healthy hatchlings during this year! Until then we, the team of Green Balkans, will be taking care of the future parents and will keep you informed about everything interesting going on with them.