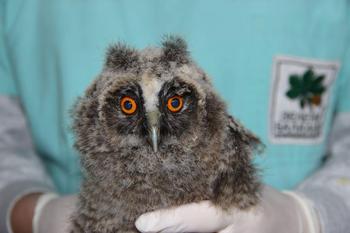 Imagine our surprise when this fluffy huge-eyed creature popped out of the box some hours later.

Despite hatching two-three months before the official start of the breeding season of Long-eared Owls, this baby was fully developed, at a decent size and well-fed, in spite of being quite hungry.

Thanking the highly concerned lady who rescued the chick, our team acknowledges that the situation was slightly underestimated by our team. Had the signal been received towards the end of April, May or June, we would have advised the lady to return the chick back on a tree, in the area where it had been found. This is as the baby has best chances if raised by its own parents!

Find more on baby owls and other baby birds and what to do if found, here.