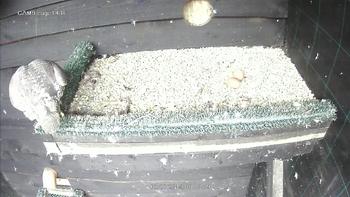 The Saker falcons in the Green Balkans’ Wildlife rehabilitation and breeding center laid an egg!

03.03.2019
We are enthusiastic to announce a good news coming from the Saker falcons in the Green Balkans’ Wildlife rehabilitation and breeding center.

A few days ago in one of the aviaries of the Center, home of a Saker falcon pair, the first egg was hatched for this season and then another one, and another one… and now there are five eggs laid by two pairs.
And this is just the beginning of the good news and we expect that very soon there will be many more eggs laid as well as chicks hatched.

Until then we will continue taking care of our feathered friends and we will keep on informing you on the news.


The activities of the Green Balkans NGO – Stara Zagora for the Saker falcon conservation are realized due to the financial support of Armeec Jsc.

The information activities of the Green Balkans’ Wildlife rehabilitation and breeding center, related to the Saker falcon are implemented within “NATURA 2000 in Bulgaria – NEW HORIZONS” - LIFE17 GIE/BG/000371.