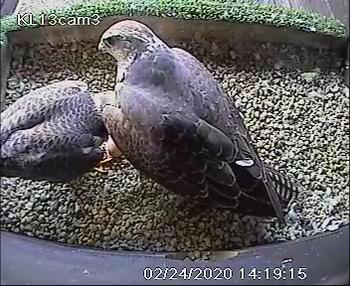 The Saker Falcons in the Rescue Centre laid eggs!

The lucky families are – Pijo and Penda; Dobri and Valna. We are saying that the egss are expected as these couples were the first that started copulating this year.

Pijo and Penda are parents with long family history starting since 2015, when they raised 4 chicks. Through  the years they had different count of successfully raised chicks with a total of 15.

Unlike them, Dobri and Valna are a fairly new couple. Тheir story begins in 2018. For the two years together, they have raised 9 chicks.

We hope for the other Saker Falcons’ pairs to bring us happy news soon.