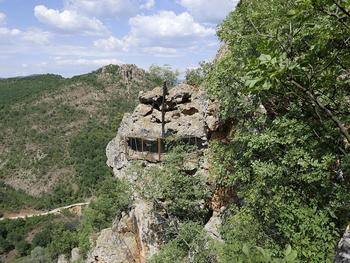 The Rocks of Arda - a future home for young Egyptian Vultures

25.06.2018
The meanders of Arda in the Eastern Rhodopes, which have built high rocks on their way, from this year will be a home to young Egyptian vultures as part of the “Egyptian vulture New LIFE” LIFE16 NAT/BG/000874 project activities.

On 18 and 19 June, a BSPB and Green Balkans team built an adaptation aviary (hack) on the rocks near Madzharovo, which soon will shelter at least 3 young Egyptian vultures hatched in 2018. The birds will be provided by rescue centers and zoos in Europe, with the assistance of Anton Vaidl - coordinator of the European Endangered Species Programmes (EEP) of the European Association of Zoos and Aquaria (EAZA). The vultures will be released at the end of August as part of the restocking program for the Balkan population within the project.

After the placement of the vultures in the hack, a team from the project will monitor and feed them until they start their life in the wild. Through an installed video camera the team will monitor the behavior of the birds in the hack and their adaptation in nature. Each bird will be tagged with a satellite transmitter prior to its release.

The hack is built in a carefully selected rock niche, which has been used by pairs of Egyptian vultures for decades, but unfortunately in the past 5 years it is empty. In 2010 in this nest was hatched the first vulture tagged with satellite transmitter – Spartak, as well as Arda, which was tagged in 2012.

Despite the bad weather, the nearly vertical slope of the trail to the hack, and the extremely difficult terrain, the team and builders of Thermo Plus 2000 Ltd did the job on time. The aviary awaits its first inhabitants, and by the end of the project at least 10 young birds are expected to use the hack.

Simultaneously, this year, as well as the next few years other release methods will also be tested, e.g. fostering and delayed release method. The aim is to find the best approach for the purposes of a future restocking program for the Balkan population.