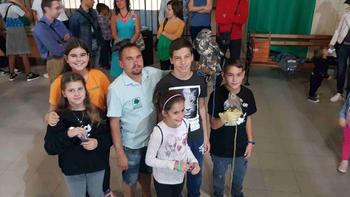 The Night of Scientists in Stara Zagora

01.10.2019
A team from the Green Balkans Wildlife Rehabilitation and Breeding Centre and a team working on “NATURA 2000 in Bulgaria - New Horizons” project took part in the Stara Zagora’s Night of Scientists held on September 27 at the Stara Zagora Regional Library.

The main protagonists there were the Common buzzard named Misho, the Common kestrel called Vladko and the Little owl Blaga - birds that will stay with us permanently due to their long-lasting injuries but fulfill the mission of being ambassadors of wild nature.

All visitors had the opportunity to see the birds up close and to learn more about the activity of the Wildlife Rehabilitation and Breeding Centre - not only it is a place for treatment of wounded animals, but also a center where conservation programs related to the breeding of rare bird species take place.

All protected bird species taken care of by the Wildlife Rehabilitation and Breeding Centre, are included in the list of species because of which the areas under the Birds Directive, part of the NATURA 2000 ecological network, have been designated.