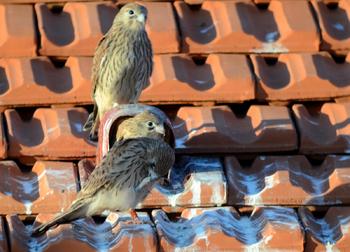 The Lesser Kestrels with Protection from the Minister, Zara and Burgas, flew over the Skies of Sakar!

20.07.2016
For a few days already the two Lesser Kestrels, Zara and Burgas, which names were given by the Minister of the Environment and Waters, madam Ivelina Vasilva herself, are now flying in the skies over Sakar.

The “Lesser Kestrel Recovery” LIFE11 NAT/BG/360 project team, came out with the good news a few days ago that the two Lesser Kestrels, hatched in the Green Balkans Wildlife Rehabilitation and Breeding Centre, and sent to Levka by the Minister Vasileva herself, have already made their first flight.

We would like to remind you that Minister Vasileva was a guest at the Green Balkans’ Wildlife Rehabilitation and Breeding Centre, and took part in the preparation of 10 young Lesser Kestrels, that were scheduled for their last leg of their journey to freedom – transporting them to the Module in Levka village. Zara and Burgas were the birds that Minister Vasileva, not only named, but assisted in putting rings and placing them in the transport box.

The two birds, together with the over one hundred other freed in Levka young chicks, are now roaming freely in the sky. We hope that they, as well as all the rest of the Lesser Kestrel colony, will manage without any hindrance to overcome the forthcoming trial – migration to their winter “dwellings”. We are expecting them to return in spring and to start their own families and in their turn to raise young.