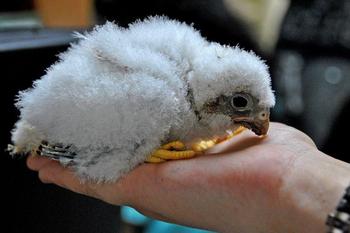 23.08.2014
These days, the last Lesser Kestrel chick hatched at the Rescue Center left Green Balkans’ Lesser Kestrel Adaptation and Release Module in the village of Levka.

Its story is the story of a lucky chick, which, thanks to Green Balkans and the team implementing “Lesser Kestrel Recovery” LIFE11 NAT/BG/360 project, hatched and flew high in the sky.

The egg was transported from Levka to the Rescue Center, when just before hatching, for some unknown reasons, it was abandoned by its parents.

In the beginning, it was placed in an incubator room. For some ten days, Green Balkans’ team took care of the small egg. It was provided with optimal temperature and humidity in the incubator, while our colleagues used to turn it regularly, just like an adult bird would do in the nest. We were also particularly focused on monitoring the weight and content of the egg. Thus, with high precision, the specialists predicted the time of hatching.

After long tense expectancy, the chick hatched and already needed proper care, similar to parental affection, specialized food, peace and, of course, safe place. These were the incubators.

Then the last stage of the chick rearing came. Before heading for the independent living in the wild, the juvenile Lesser Kestrel was placed in the Adaptation and Release Module in the village of Levka. The adult Lesser Kestrels breeding in the Module took over the caretaking of the chick. They taught it the last “lessons” for survival in the wild.

And today, after so much effort and hard work, our Lesser Kestrel flies in the sky of Sakar.

Below, you can find some statistics of the Lesser Kestrel breeding season at the Center.

In 2014, we bred a total of 48 adult birds at the Rescue Center within "Lesser Kestrel Recovery" LIFE11 NAT/BG/360 project, implemented by Green Balkans with the support of the LIFE program of the European Union.

Despite their young age, being only yearlings, some of the birds formed 11 pairs at our facility. This summer, two of the families were “sent on a mission” to the Release Module to show the youngsters how to survive in the wild.

The ones that were kept at the Center, although young, incubated and raised 26 chicks. They were all released into the wild through the structures of the Lesser Kestrel Adaptation and Release Module run by Green Balkans in the Sakar Mountain.

Moreover, our birds proved to be excellent foster parents and raised 9 chicks that had been admitted to the Centre as eggs or newly hatched chicks from the adaptation aviary in Sakar. Without the intervention of our team, in the wild these 9 babies would become victims of natural selection. For us, however, every Lesser Kestrel chick is important and has its role in the recovery of the species in Bulgaria’s wild.

So, the total number of Lesser Kestrel chicks raised at Green Balkans’ Rescue Centre in 2014 was 35 individuals.

They all fly in the sky of Bulgaria now and get ready for the long and risky migration. We hope they will return next year and hatch their offspring to become part of the recovery of the Lesser Kestrel in the country.