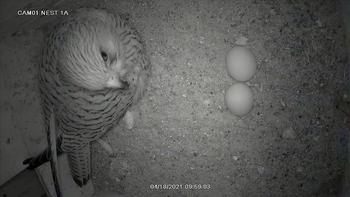 21.04.2021
We have wonderful news that came to us with the beginning of the week - eggs have already appeared in the nests of the Lesser Kestrels at the Green Balkans Rescue Centre!
The female of the couple, the leader, for this year, is a bird donated to our team from Spain, during the first project for the return of the Lesser Kestrels in Bulgaria, which Green Balkans started working on in 2018. The male is younger than her, hatched at the Centre in 2019.
The two birds have previously bred, also successfully, but with other partners, which is not a surprise for the species, as the Lesser Kestrels often change partners!
Curiously, the family uses the same nesting platform that the female lived with her previous partner last year, which has become her favorite home!
At present, there are 18 birds, three copulating pairs, and a total of 8 laid eggs in the breeding colony of the Rescue Centre.
We remind you that all the young hatched this year will be released into the wild as part of the 'Life for Lesser Kestrel' LIFE19 NAT/BG/001017 project activities.