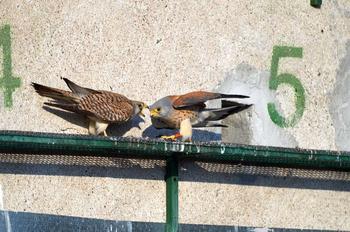 04.05.2017
We are very curious and finding it very interesting to take a sneak peak in the life of the Lesser Kestrels in the last few days and to share with you what we have discovered.

And it is rather interesting over there, and some really magnificent things are happening.

For those of you who have not seen the news, let us recap, that for the fifth year in a row Green Balkans works the “Lesser Kestrel Recovery” LIFE11 NAT/BG/360 project. We asked the people in charge of the Wildlife Centre, and the Lesser Kestrel Release and Adaptation Module in Levka village, to tell us who, what, and who many kestrel pairs are there in this breeding season, what may we expect, and some exciting stories from their lives.

We start with the story form the Wildlife Rehabilitation and Breeding Centre, where Yordanka Vasileva, breeding programme assistant tells us: “There are 18 pairs up to this moment. The number of eggs laid is 83 (and with only one broken). Most of the pairs have remained unchanged from previous years, but there are some newly formed, and one where both of the birds are breeding for the first time (the one-year-old Kalin and a grown female). I think we will not end with this, Yordanka continues, because there are two new copulating pairs. There are 2-3 more with marital behaviour, but if they don’t hurry up they’ll miss the train (season)…” end the tale Yordanka.

Our colleague Simeon Marin, Field work coordinator in Sakar, tells us the following: “From the start of the season there have been 52 birds in total, 31 males and 21 females. From the number, there are 42 in the colony, and the rest are just passing through. There are 2 wild birds, without rings, passing through. Until today there are 15-17 formed pairs, continues Simeon. One of them has already laid eggs (5 in total) and started incubating, another 2-3 are laying in the moment. There is a chance, thanks to the late breeding season, caused by the climatic fluctuations, not all pairs to breed this year” sums up his tale Simeon.

And so, as you see, the things are interesting and rather dynamic. We will continue to keep you informed for everything that happens with the Lesser Kestrels for the project, financed by the European Union’s LIFE Programme.

We hope to bare good news, and this year too hundreds of young Lesser Kestrels to fly in Bulgarian skies.

The “Greater Chance for the Lesser Kestrel (Falco naumanni) in Bulgaria” project was awarded the Moto-Pfohe’s Donor Programme for Preserving Natural and Cultural Heritage in Bulgaria!