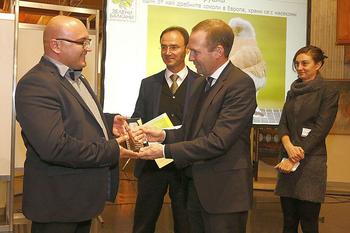 The Lesser Kestrel Recovery Project by Green Balkans is the 2016 National Winner in Moto-Pfohe’s Donor Programme for Preserving Natural and Cultural Heritage.

11.12.2016
The official award ceremony was held on 8 December in the Sun hall in the National History Museum, Sofia.

The “Green Balkans – Stara Zagora”’s “Greater Chance for the Lesser Kestrel (Falco naumanni) in Bulgaria” LIFE11 NAT/BG/360 project is the big winner in the 2016 Moto-Pfohe’s Donor campaign for preserving natural and cultural heritage. The aim of the project is the recovery of the Lesser |Kestrel as a nesting species in Bulgaria, and is carried out by Green Balkans for the EU’s LIFE Programme.

“Every species that goes extinct echoes as a terrifying scream on the planet and disrupts gravely the biological balance, that additionally disturbs the natural equilibrium. The preservation and aid of the rare and protected species’ population, or the recovery of already extinct species in the places that they are no more is an important nature preservation method. This is the winner project’s goal. To permanently recover the lastingly extinct population of this small falcon”. This was the way that the Donor Programme organizers from Moto-Pfohe announced the award for Green Balkans of 10 000 lv., diploma and plaque, presented by Mr. Philip Pfohe, owner and manager of Moto-Pfohe, and Dimo Nikolov, manager of Moto-Pfohe.

The money from the award will be used from the environmentalists in the Lesser Kestrel preservation and recovery action, carried out in SPA “Sakar – BG0002021”, part of the NATURA 2000 ecological network. There, thanks for the Green Balkans’ effort, the species is nesting in Bulgaria once more, after several decades it was considered that it was not breeding in Bulgaria.
The Moto-Pfohe Donor campaign award is the biggest public acknowledgement that the Lesser Kestrel project received to this moment on national level, after the may shortlisting and the Team of the “Lesser Kestrel recovery” LIFE11 NAT/BG/360 project was amongst the European Committee “NATURA 2000” Award Ceremony participants.

During the official award ceremony in the Sun hall of the NHM, there was an improvised mini-exhibition of one of last year’s winners of the Donor programme – the “Exhibition of volume – Perception by Contact. Animals of the Black Sea” by Environmental Association “Nature One”. Life size models of the most memorable and interesting black sea inhabitants, stir a great interest among the visitors.

The first encouragement award in this year’s 20-th anniversary issue of Moto-Pfohe’s Donor programme for preserving the natural and cultural heritage was awarded to the “Climate monitoring, river network and risk process in Pirin” project. Ass. Professor Georgi Rachev is the project’s author, leader of a collective from the Sofia University “St. Climent Ohridski” Geology-Geography Faculty’s Climatology and Geomorphology department.

The second encouragement award of Moto-Pfohe’s Donor programme for preserving the natural and cultural heritage was awarded to the “Method Taratanci” project. This is a graphic representation of Bulgarian folk dances in the form of schemes and steps with different shapes and coulours – the goal is to preserve our folklore arts.

For the first time in the Donor programme there was a special encouraging award for media, actively involved in the environmental protection. This award was presented to BNT2 for their campaign for the illegal tree felling all over the country.

The Donor programme’s main goal was always the urge, that it will aid, not only financially, by way of voicing and publicizing the efforts of many institutions, collectives and individual participants to preserve our cultural uniqueness and identity.
In 2016 there were 41 project from all over the country that entered the programme, in two categories – environmental preservation (17 participants), and cultural heritage (37 participants). For the 20 years of its existence the Programme had 1149 participating projects, 84 of which received 328 000 lv. in total, including this year’s participant, receiving a sum of 20 000 lv.

The Green Balkans team expresses its gratitude for the acknowledgment to the organizers of Moto-Pdohe’s Donor Programmea amd the jury members, as well as all of the officials, and award ceremonies official.

We have to underline the contribution of all the experts, volunteers and like-minded individual of Green Balkans, that took part in the process of the Lesser Kestrel recovery in Bulgaria!