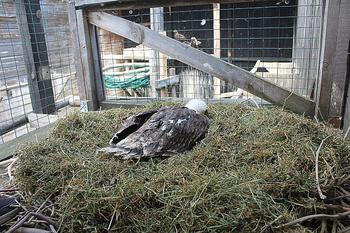 The Imperial eagles pair at the Green Balkans Rescue Center became the foster family of a wild, young chick of the same species!

28.07.2022
Do you remember the young Imperial eagle, saved some time ago by the Green Balkans team, during the traditional marking of the species in our country?

It was initially placed in intensive care, and later in a specially adapted small cage, in the eagle couple's aviary at the Center.

For weeks, the chick had visual contact with the adult birds, and its food dropped from the alcove without it seeing humans.
A few days ago we opened the little one's cage to the big aviary of the adults, and today it made its first, brave, leap to freedom - to the nearby perch!

The method we use helps the young birds to copy the behavior of the adults, thus making them as adapted to life in the wild as possible. It has been used by our team for years now and gives very good results in the feral orphans entering the Center.