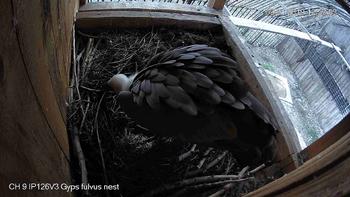 The events in the breeding program this year progress according to our greatest expectations until now. After the Bearded vultures laid their first egg for the season, which we certainly believed they will do, the Griffon vultures carried on the trend of excellent breeding behavior. This arouses hopes that this year we may have a Griffon vulture chick for the first time in 5 years now.

The male which was parent of the first chick ever hatched in the Center in 2014 had a few unsuccessful breeding seasons with another female. It is obvious that he is already in close relation with his new female, although this is their first year as a pair. Their breeding behavior is proper and both birds take the initiative in building the nest. For a couple of days now we’ve been observing successful copulations.

We keep our fingers crossed for the Griffon vultures to lay the next egg!

Griffon Vulture
Widespread and numerous in the past, at the end of the last century the Griffon Vulture had only 1-2 active nests restricted to the Eastern Rhodopes. Thanks to the efforts of conservation organizations, today the population of the species is growing and we can see it in the Balkan Mountains, Eastern Rhodopes and Kresna. The species and its habitats are protected by the Natura 2000 ecological network.