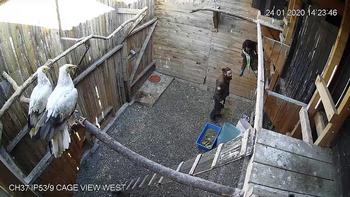 The Green Balkans team began preparations for the new work season for the Egyptian vulture!

At the end of last week, the project team placed new nesting material in the nests of the three pairs Egyptian vultures in the Wildlife Rehabilitation and Breeding Centre. We remind that two of these pairs had a successful breeding season last year and managed to raise three chicks in total. Two of them were released in nature as part of the project, and one still remains in the Centre.

At the same time, the Green Balkans' fieldwork team of the project was on site. Our colleagues' task was to replace the door of the adaptation aviary near the Rhodope village of Potochnitsa. The new one would be much quieter and would not cause stress for the birds when it's being opened during their release. As you probably already know, that aviary is for the projects' experimental release activity. It hosts year-old Egyptian vultures prior to their release in nature. The method is being tested for the first time in Bulgaria for this species, and it's been successful so far.

Expect more news from the Egyptian vultures soon. We promise they would be interesting!