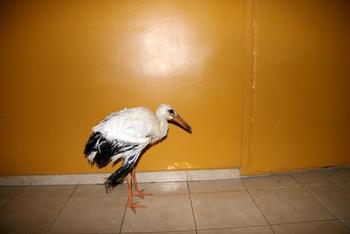 The Green Balkans Rescue Centre has separated with one of its long-standing inhabitants!

25.02.2020
It is with great grief we share that our long-standing inhabitant and beloved feathered friend - Zelcho, has passed away a few days ago.

His story begins in the distant 2011.

On an ordinary autumn day, we received a signal for a stork, but not anything but a small, underdeveloped stork. Zelcho, called this way by the Green Balkans Rescue Center team, was so small in size because of one lady's over-concern. The woman, in her attempt to help the young animal and release it later, missed the fractures of its two wings. The wrong diet helped to slow down the growth and the proper development of its feathers, growing in different directions - just like the leaves of a cabbage, from where comes its name - Zelcho. In addition to his injuries, he had one, even greater - imprinting. This happens when a wild animal is raised in such close contact with humans - it stops recognizing its own and begins to think about itself as a human being.

But let's not be sad, and look at his life story as an example of how help should come from a specialized team that knows what the particular animal needs. If Zelcho had been delivered to the Green Balkans Rescue Center on time, after a short stay and rehabilitation he would have spent the rest of his life free in the wild among his species.