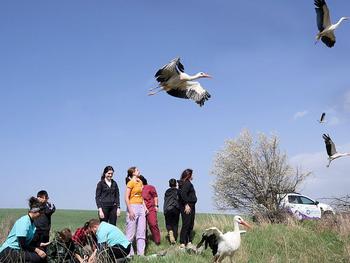 The Green Balkans Rescue Center for Wild Animals celebrates the International Bird Day, the 1st of April, by releasing storks into the wild

05.04.2022
The event was visited by tens of children and their parents and Veterinary Medicine students from Trakia University, that were a part not only of the release but in the preparation of the birds, that included- medical examination, deworming and marking them with rings.

After that 10 of the storks were released by the children and their parents in the region of Opan’s lake and the other two in an event in Belozem village.

Each of the released storks has spend the winter in the Rescue center, and were held on, on the veterinary recommendation of our experts, whom have assessed that the bird will not live through the long migration journey. Now after the rehabilitation process has ended the storks are ready to live on their own back in nature. Our hope for them is to be able to make families and raise young.

That is how the Rescue center’s team and its volunteers celebrated the International Bird Day – 1st of April.