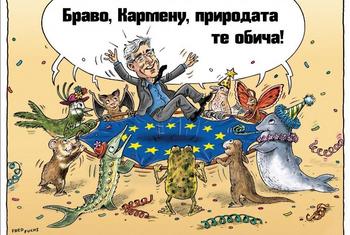 The Europeans Saved Their Nature Laws with a Massive Campaign

08.12.2016
The European Commission confirmed that the two main directives for environmental protection in the EU (the Birds Directive, and the Habitat Directive) will be left unchanged as a result of the huge campaign “Nature Alert!” for their protection. – “Let us enforce the Directives better from now on”, the NGOs say.
Jean-Claude Junker, the Chairman of the European Commission confirmed that both European directives – Birds and Habitat will be left unchanged, thus the proposal for their change and reduction of their protective value has been stopped. The most important European instruments for nature protection were in danger of change in the last two years, and their future was uncertain. Today chairman Junker and the European Commission urge for better implementation and enforcement of both Directives. They are the European Union’s (EU) instrument for nature protection of the Old world, by protecting more than 1000 endangered species and almost one million square kilometers of habitats in Europe, mainly via the NATURA 2000 ecological network. The Directives were not only defended by ordinary people, but also by academics, business, European Parliament and national governments.
This is great news and success for the nature protection community in Europe. During the public consultations, Bulgaria gathered over 10 000 signatures, this places our country among the biggest European countries considering the number of signatures gathered. This shows how important the NATURA 2000 network and nature protection as a whole is for our community. This success was possible with the “Nature Alert!” campaign that took place all over Europe.
Several organizations and colleagues were especially active on the subject and we would like to congratulate them with this huge success: Bulgarian Society for the Protection of Birds (BCPB), Bulgarian Biodiversity Foundation (BBF), the Park Association in Bulgaria (PAB), and WWF Bulgaria. Popular persons from Bulgaria and the tourist and other sector representatives supported the NATURA 2000 Directives. Their messages, together with the messages of thousands other European nature protectionists were shared in Facebook, Twitter, and forwarded to European MPs and to the EC.
Because of this joint effort, as well to the successful Bulgarian projects, built over the years, in which those carried out by Green Balkans, Bulgaria stands officially in the NATURA 2000 and the nature supporters camps today!
The nature protection NGOs welcome the EC’s decision, but also underline, that the difficult part is yet to come, in order to make this decision in a real win for the environment. They suggest to keep a sterner eye in enforcing both Directives, and to introduce measures for managing one of the biggest field, leading to loss of nature, namely intensive agriculture.
Now the nature NGOs expect from Commissioner Vella to propose the next action under the form of an Action plan, until spring of 2017, so as to achieve the goal of the EU – stopping biodiversity loss until 2020.
***
Additional information about the Directives and the campaign
The Bird Directive and the Habitat Directive help reaching the EU’s goals to stop biodiversity loss and to aid its recovery until 2020. There is the basis of the creation of the biggest network of protected territories in the world – the NATURA 200 network, that covers over 18% of the EU’s territory (over 1 million square kilometres) and approximately 6% of the aquatory of Europe.
Bothe Directives ensure the protection of endangered habitats and more than 1000 rare and vulnerable species, among which are the Imperial eagle, Lynx, and Dalmatian pelican. More than 1 billion people visit the NATURA 2000 protected areas such as the Danube Delta, the Carpathian Mountains, Vadenzee annually, supporting between 4.5 and 8 million employees.
A record number – 520 325 people took part in the consultations with the European Commission to discuss the Directives in 2015, and 94% of the participants called for the keeping of the Directives, and their better enforcement, in this way contributing to make the EC’s responsibility greater.
The #NatureAlert is the biggest public campaign in the history of the EU, uniting more than 520 000 Europeans in support of the Birds and Habitat Directives and their better enforcement. For more details about the campaign please follow: http://www.naturealert.eu
The Nature Alert Campaign started as a response to the EC’s intention to revise the Birds and Habitat Directives. This became clear from the instruction given by the EC’s chairman Jean-Claud Junker to Karmenu Vella, European Commissioner for the Environment, Maritime Affairs and Fisheries in 2014: “To enact a detailed analysis of the Birds and Habitat Directives in their more modern part of the legislation”, as part of the initiative called “better management”. An unprecedented coalition of over 200 environmental NGOs from all member states of the EU put together a clear message of the citizens, that the Directives have to be preserved and better enforced, not “modernized”. This way the European citizens succeeded in saving the nature protection in Europe. We thank all of them.
In December 2015, the Environmental Council admitted the importance of fully enforcing these “paramount” legislation in order to “maintain the judicial security of all interested parties”.
In February 2016 with overwhelming majority the European Parliament voted against “possible revision of the environmental protection directives”.
312 small and medium enterprises asked the Commission to preserve the stable, effective and foreseeable environmental legislation.
Sources: BSPB, “For the Nature” Bulgaria, CEEWEB