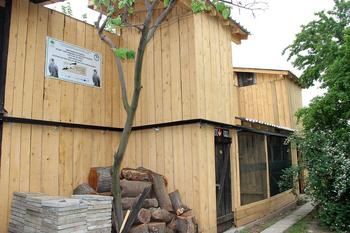 02.05.2018
A few days ago the renovating of an aviary in the Wildlife Rehabilitation and Breeding Centre was completed, which is going to be the home of new pairs of Egyptian vultures, formed in the Centre's stock aviaries

The renovating, part of the "Egyptian Vulture New LIFE" LIFE16 NAT/BG/000874 Project, will give our team the opportunity to monitor closely the newly formed pairs, which the experts will separate from the general flock of the young Egyptian vultures in the Centre, so these pairs can later easily be transfered to other centres or zoos in the country and Europe.

The hatchlings of these birds will be released in Bulgaria, in aid of the wild population of the species in the country and in Europe.