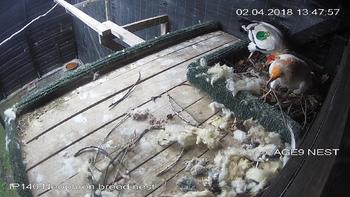 The Egyptian Vultures pair in the Green Balkans Wildlife Rescue Center is already in a breeding period!

02.04.2018
The pair of Egyptian vultures in the aviaries of the Green Balkans Wildlife Rescue Center have been copulating for a second week now.
And while the first few days the copulations were rare, they have increased significantly lately. Besides, the two birds feverishly fix their nest, and the female lying in it longer.

This is a clear sign for the Center's team that the first egg for this year will appear in the very near future.
We recall that last year copulations were observed for the first time. Subsequently, the female laid two eggs, which both parents cared for. Unfortunately, the eggs proved to be unfertilized.

Hopefully this year their experience will help them and eventually they will succeed to please us with hatchlings.
Green Balkans Rescue Center is part of the project "New Hope for the Egyptian Vulture" in partnership with 13 other organizations from Europe, Asia and Africa. One of the main roles of the Center is formation of Egyptian Vulture pairs and development of breeding birds’ population in captivity.